← Reconceived Notions
Giving up the Ghost →

“We need constantly to contemplate the mystery of mercy. It is a wellspring of joy, serenity, and peace. Our salvation depends on it.” 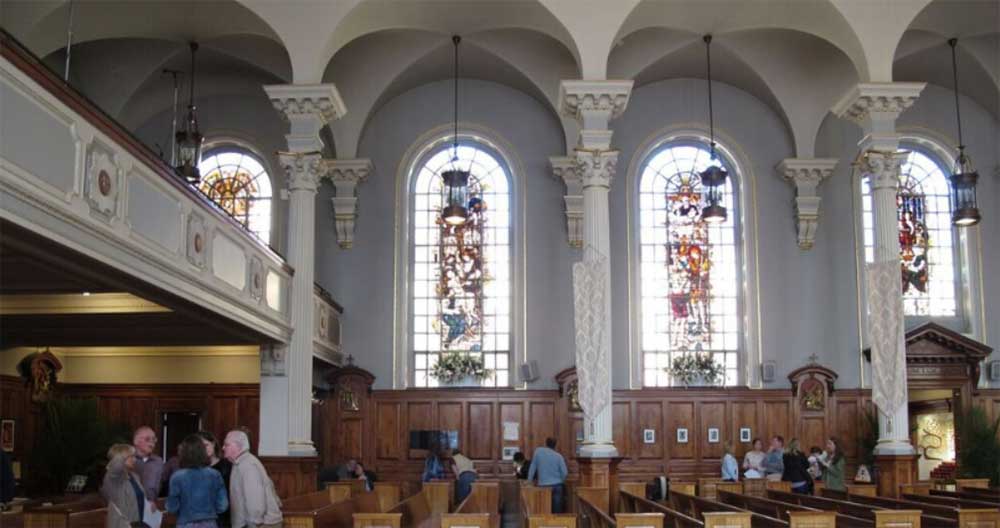 We watch the destruction of lives through war, injustice and poverty as abstractions making it possible to disconnect from their reality, but it is not possible to disconnect from the tangled mesh of life itself, the faint flutter of the butterfly’s wings that reverberate and set off a series of events that come full circle. Suffering that is inherited through the ages, a never-ending cycle. 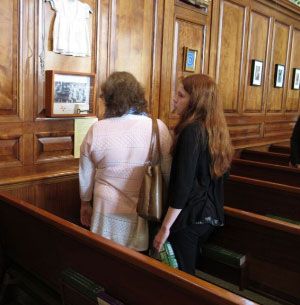 Like the butterfly’s kiss our actions need not be large. A flapping wing, a merciful wing can alter a system. Giving justice is a salve that soothes, but granting mercy is anathema to our instincts for it calls for us to cede power. Mercy allows for an escape, it gives us a way out and leads us to love.

Life is a dynamic system and we are a part of its trajectories and iterations. Mercy counters behavior that destroys and fractures our fractal world.

We are granted mercy in all forms, simple and complex. It is critical for us to note the simple, the daily and the mundane aspects of divine mercy alongside the grand acts of mercy that inspire awe in order to become agents of mercy.

This show is a celebration of our interconnectedness and a call to illuminate the need for mercy, moments of mercy and avenues towards a more merciful existence.

“Being apostles of mercy means touching and soothing the wounds that today afflict the bodies and souls of many of our brothers and sisters.” -Pope Francis

Suffering is universal. As humans we feel pain and we inflict pain. Although this exhibition takes place in a Catholic place of worship and is inspired by the Pope’s Jubilee of Mercy, the artists in the show are of different beliefs and their interpretation of mercy varies from the personal to the political.

Sounds of mercy delivered by talented musicians precede the sights of mercy offered by visual artists as commentary, illustration, edification and expression in this show entitled Misercordiano. (Misercordiano: mercy-ing, a word coined by Pope Francis to focus on how we are to act in mercy, the word mercy becomes an active verb.) 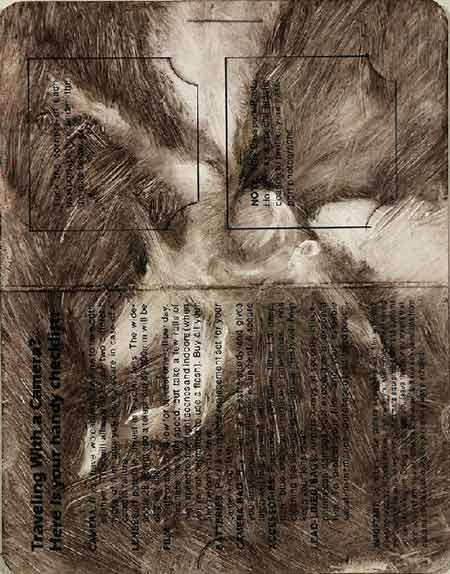 Audrey Anastasi’s series of small paintings on travel documents addresses “empathy, the importance of touch and protection of fellow human beings.” The images are quickly and masterfully painted and denote the plight of refugees and the never-ending stories of humanity in flight.

A number of the works in this show reference personal loss or the memory of a loved one who lived a life of merciful existence, touching people with their kindness, knowledge and love whose immortality continues through their acts. Mary Ann and Madeline are two works that celebrate and mourn the lives of two women who greatly influenced the artist, Jeannine Bardo. Both teachers, these women left their mark through their love, teaching of knowledge and by example. Madeline honors a much-loved St. Ephrem teacher, Madeline Scotto and Mary Ann is a devotion to the artist’s mother and was made shortly after her death. Aelushi Mistry’s photo Shubh Kamana references her Indian culture and rituals in reverence to her father who is esteemed by so many through his life of merciful acts.

Ghosts of the past find their voice through the work of Cheryl Lynn Parry who researches and brings to light the suffering of the invisible and exploited victims of society. Her installation works consist of memorials to the victims of the Triangle Shirtwaist Factory fire and dignified chronicles honoring domestic workers. Bringing her Magdalene Laundries into the church setting for this show is timely in the wake of Pope Francis’s document on the family “Amoris Laetitia” where he exhorts the need to rule with compassion as opposed to strict doctrine. The women of the laundries, the “Magdalenes”, were deemed “less than” creating a cycle of exploitation and abuse. Harsh judgment and not the mercifulness modeled by Christ led to the victimization of the most vulnerable. Parry’s “haunts” find their way through her work to keep their stories alive and reach out to us for mercy.

Giving voice to the marginalized is also the impetus of artist Ellen Coleman Izzo’s work. She uses the medium of printmaking as a “vehicle for driving change”, her Homeless Memorial Book was inspired by her trip to Washington D.C. and the large population of homeless people that were living in plain sight among the tourist sites, but invisible nonetheless. Daniel’s Space is a poignant reminder of the need to value everyone’s humanity.

Maya Carino’s work Anatomy of Sight is a fundamental reminder that we must “see” each other through the eyes of compassion and live the Golden Rule.

“To protect creation, to protect every man and every woman, to look upon them with tenderness and love, is to open up a horizon of hope; it is to let a shaft of light break through the heavy clouds; it is to bring the warmth of hope!” –Pope Francis

Pope Francis’s encyclical, Laudato Si’ addresses humanity’s interconnectedness and calls out for us to understand that:

“we are not faced with two separate crises, one environmental and the other social, but rather one complex crisis which is both social and environmental.”

Several works on view focus on our connections to nature and like Pope Francis illuminate the need for an integral ecology. Isabelle Garbani uses the ubiquitous plastic bag as a material in her works as a warning.

“My choice of materials reflects this paradoxical view that I have of American culture. Plastic is indispensable and it is completely unnecessary; it is vital to our modern lives and it is harmful to our environment; it is a true technological achievement and a sign of our failure.”

Her piece, Ft. Lauderdale made from plastic bags, transforms the feeling of a simple moment in the artist’s life into an omen of a post-human world choked by its own “success” simply by her choice of materials. 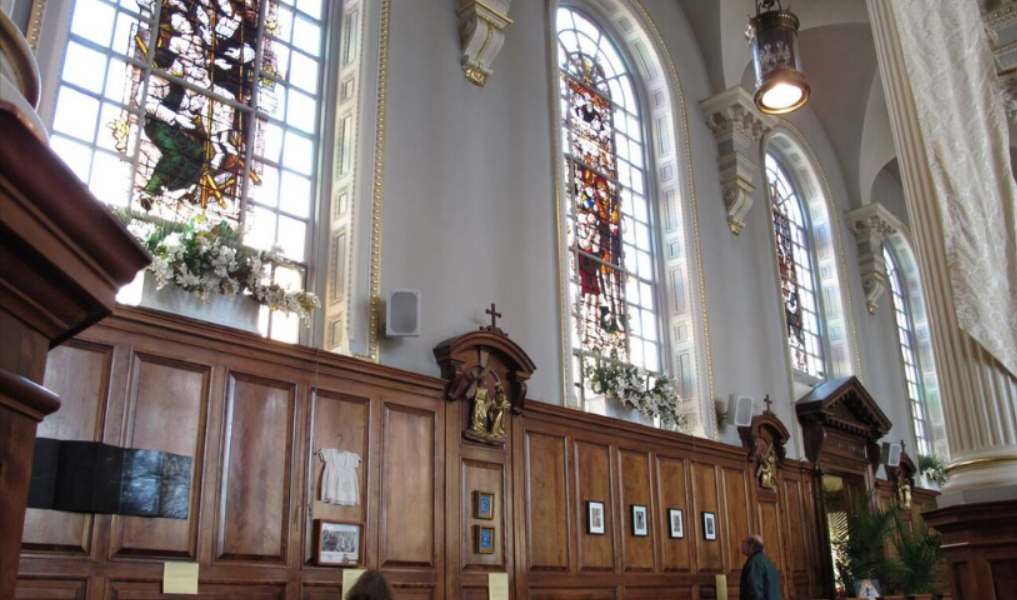 Heidi Zarou’s photographs celebrate the spiritual healing aspect of nature and Maura Smith’s image Mary’s Tear is an illustration of the Blessed Mother’s mercy for the world that is prevalent in Catholic teaching.

An agent of mercy is frequently borne through a person’s own self awareness. The need for mercy is often illuminated in times of stress, doubt and darkness and artists often find their voice through the artistic process. Like prayer, it is only when one gives in completely to the process that answers reveal themselves.

The artist Gina Colazzo’s series Illumination is an example of finding a new voice through the contemplative action of painting. The making of Chris Froelich’s Discussion with Ricomarked a moment of clarity and connection between father and son and artists Alicia Degener and Cheres Espinosa gratefully acknowledge the importance of a strong community to cultivate a merciful existence by using the community as their subject. Maria Mottola’s Larry finds the dignity of a “pathetic and awkward” soul through the drawing practice by deeply contemplating her subject in relation to her own bias and Jacqueline Wadsworth’s Passion to Mercy reminds us that mercy can only be present in the world if it is first present within ourselves.

Mercy relies on faith. Like the butterfly’s kiss, our actions need not be large. A flapping wing, a merciful wing can alter a system. Dispensing justice is a salve that soothes, but granting mercy is anathema to our instincts for it calls for us to cede power. Maria Mottola’s Altar Piece favors the concept of mercy in her early Catholic teaching and Joanie Flickinger likens her work to a “valentine from the creator”, a message that engages her faith. Hence the title:

…”And there shall be no more death” 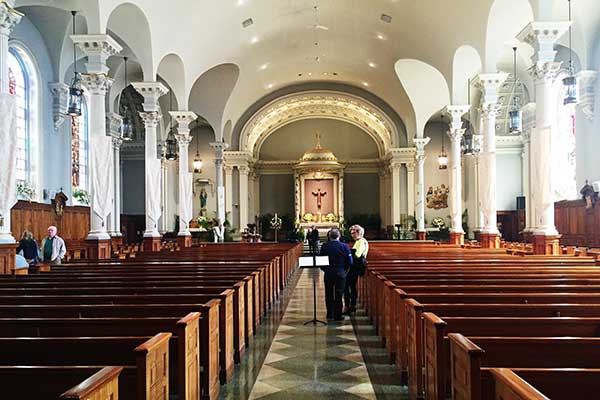 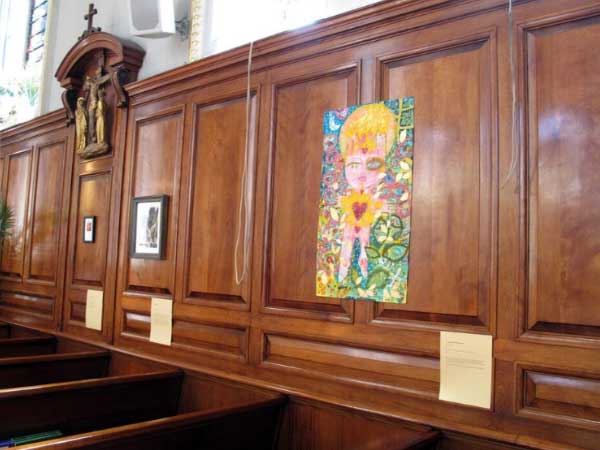 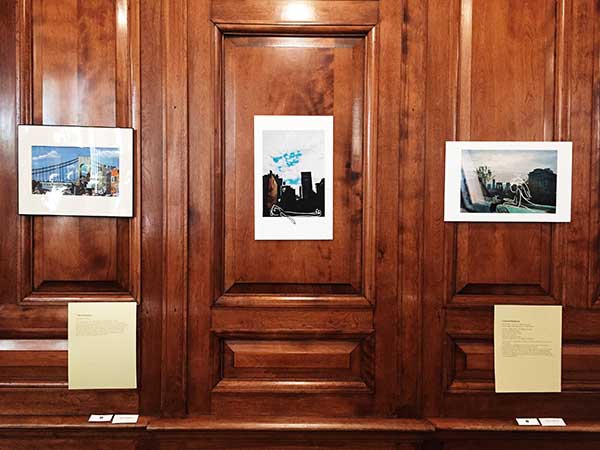 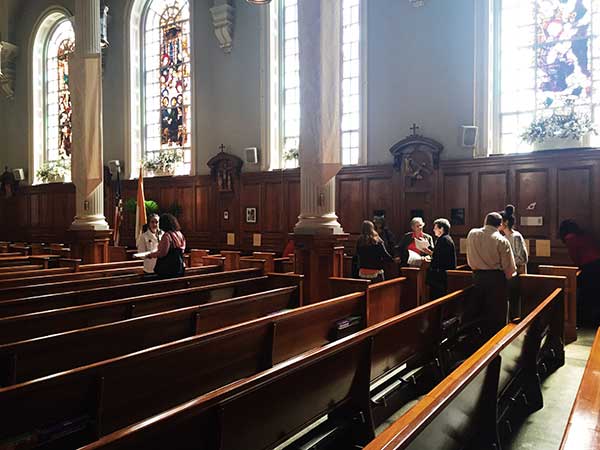 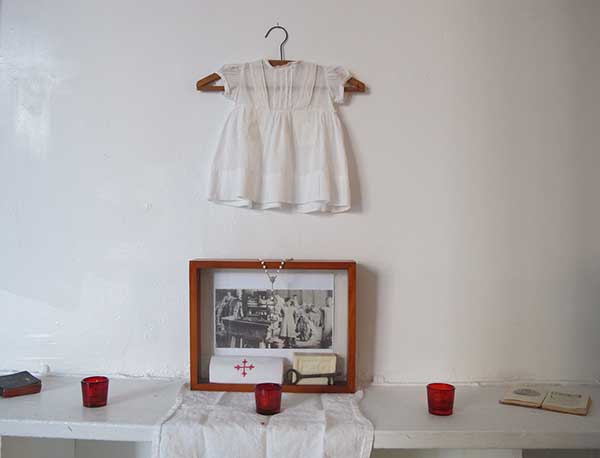 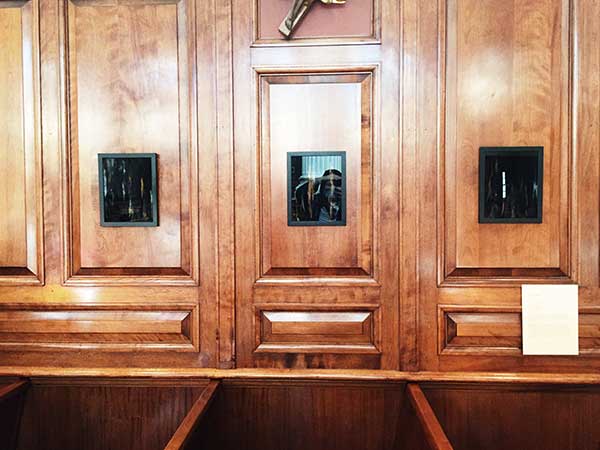 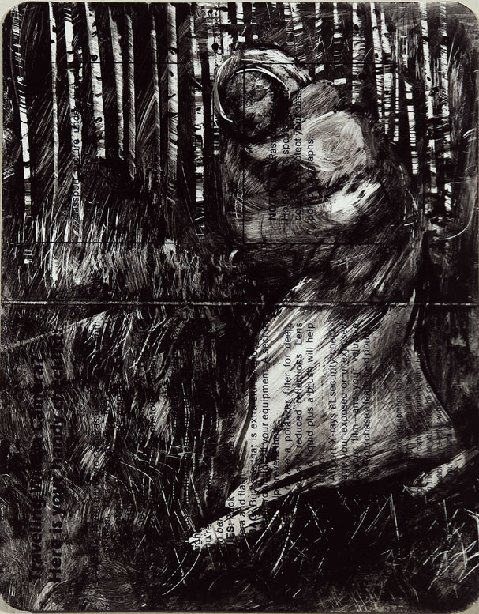 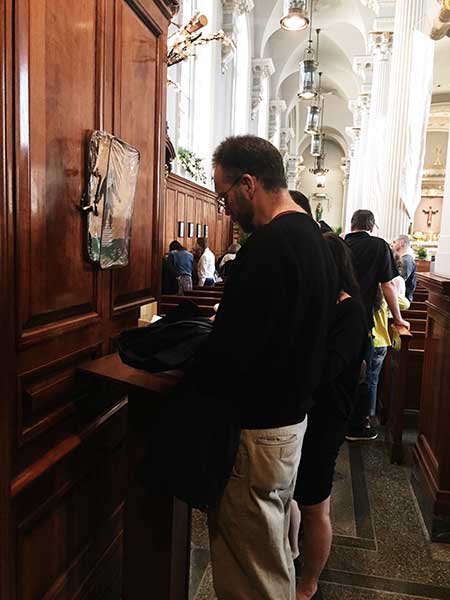 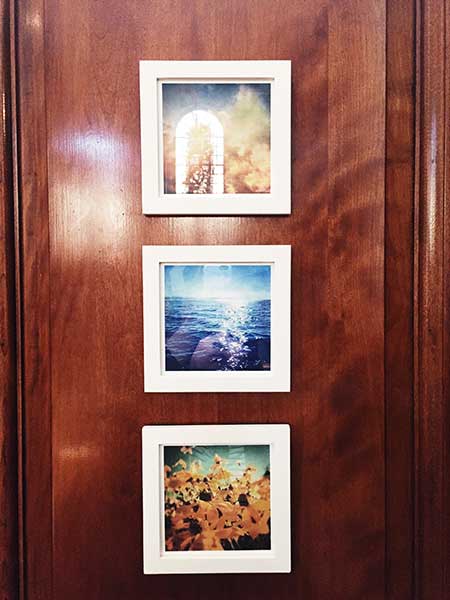 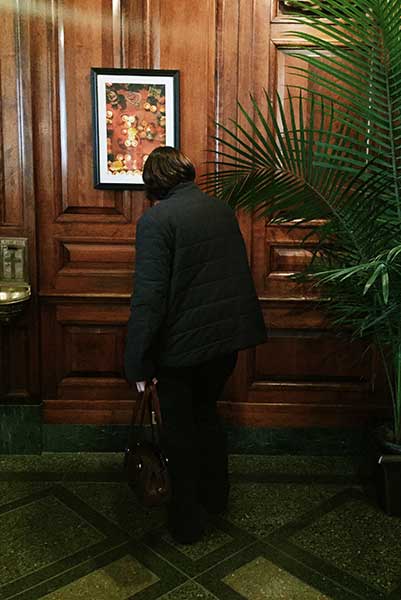 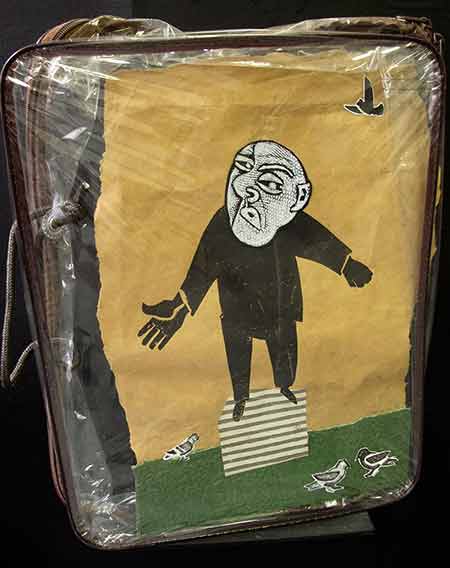