A Thousand Fibers at Brooklyn Stitchery

“We cannot live only for ourselves. A thousand fibers connect us with our fellow men; and among those fibers, as sympathetic threads, our actions run as causes, and they come back to us as effects.” ― Herman Melville

Portrait on back wall by Audrey Anastasi, purchased by Brooklyn Stitchery

The ancient art of weaving and sewing, long considered women’s crafts are rarely elevated to the high arts such as painting and sculpture, yet a painting is often supported by a weaving, the canvas that allows for the picture plane in which paint magically forms into an image. Weaving is one of humankind’s first forms of technology with samples found from the Paleolithic era, a time when humans began to produce works of art and it marked the early beginnings of religion and ritual.  Weaving produces a grid. It is the original grid as noted by the artist Beryl Korot during her immersion into the weaving process

“ I had become aware of the loom as the first computer on earth in that it is programmed pattern according to a numerical structure. It is the original grid constructed by humans with technology, whether simple reeds and wood and fibre often attached to a weaver’s body, or with punched cards, harnesses and treadles to increase speed…”

a paradox of simplicity and complexity. Woven fabric is stitched to create form. A form used to cover our bodies not only for protection but also to create an identity whether it is an individual or a collective identity. 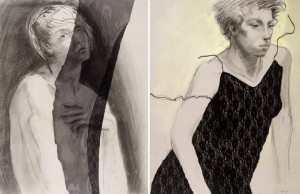 Both of these skills, borne of necessity, created community and have become enmeshed in the social, economic and linguistic “fabric” of most cultures. We weave stories, spin yarns, fabricate lies, patch up relationships, hem ourselves in, mesh with others, in social networks, the world wide web, or face to face.

Melville’s words can almost be considered literally in the history of textiles, but his intentions were poetic and speak in metaphor of our higher calling as conscious beings on this Earth.

The artists in “A Thousand Fibers” have been chosen because of the use of fiber and textile materials through the art process in their literal, metaphorical and historical context and how their art connects to others and their world. 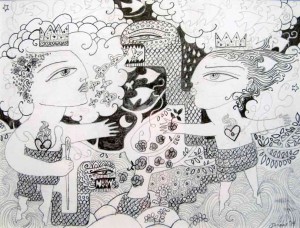 Inspired to create a new work based on the show’s theme Jacqueline Wadsworth conceived of a mythical world in which the hopes and hearts of a king and a queen, representing humanity, are tethered together along with their triumphs and failures in their journey through time and their relationships with each other and the natural world.

Time and its’ inevitable offertory of loss is addressed in Lisanne McTernan’s piece I Can’t Let Go. Artifacts with personal connections to McTernan’s past are deconstructed and reworked leaving the viewer with their own archeological riddle to work through.

Cynthia Alberto’s Shawman’s Shawl uses hair, fibers of the body, to create a garment that addresses the politics of hair and its universal language as well as its function and beauty.

Line is prevalent in the work of Aidan Sofia Earle. A line drawn with needle and thread, used to join objects and create new worlds formed with our detritus, worlds that are familiar and foreign, beautiful and abject. 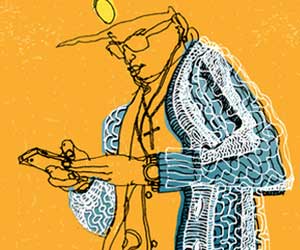 Peter Wadsworth‘s line uses traditional drawing tools, but the line from his pen or pencil begins with the textures, patterns and forms of the clothing of his subject. Using his time traveling by train, Peter sketches portraits of his fellow commuters and discerns his choice of subject by the aesthetics of the apparel they wear. His drawings not only hone his skills and capture a moment and a personality they also connect him to his subjects and fellow commuters by opening up an opportunity to communicate with others.

In contrast, the drawings of Audrey Frank Anastasi begin with a drawing of the female form subsequently “dressed” with lace, the fabric of seduction, innocence, sweetness and tradition. A feminist artist, Anastasi confronts the convention of the female form as object over subject.

Heidi Lanino in her textile-inspired works deemphasizes the human form from the image and exalts the garment of the wearer by giving it the stage and using it to evoke emotion.

Like Lanino, the garment as subject is also found in Joanie Flickinger’s Couture series, but Flickinger’s work plays with recognition by imbuing her classic dress forms with vintage printed paper and text that both recall a bygone age and bring in fresh context.

The works of Ellen Coleman Izzo address the disparity of the homeless and the culture of materialism. Inserting homeless subjects into the comforts of home, Coleman reminds us of their humanity and presence in our world.  Here, the ironies are summed up with Threadcount v Threadbare.

Jeannine Bardo’s paintings are objects made up of paint, glass, crystals and thorns. These materials and found objects are fused in conflict with a woven garden mesh, a tool to control the natural world, to create works that focus on the human struggle to tame the wilderness and exploit its resources.

Katherine Matos paints with fibers. Her artistic journey is process-based and begins with her mastery in the craft of weaving.  Matos allows her senses and understanding of the materials to guide her aesthetic decisions.  Decisions made in response to the textures, colors and properties of the fibers are evident in her piece Experiment in Color and Texture.

Yeimi Salazar’s works examine the connection of language and emotion and exposes their truths and affinity by revealing them as separate entities. Side by side we see them as interchangeable and wholly a part of what we are. They are our contradictions, our binary self. In Salazar’s work Heartless, a human heart is made with a simple cotton ball and paint. Benign and sympathetic it belies its’ wicked title.

Human lives connected by threads, weaves its way into Catherine Petrosino’s figurative and literal narrative. Inspired by her work teaching her design skills, Catherine is in awe of the capacity of the fiber arts to connect people. Her studio is a place to strike root, a rhizome that spreads to others. Unlike The Fates of mythology who controlled the metaphorical thread of life, Petrosino’s heart is open to fate that is offered serendipitously and that heart finds its way into her words and her craft.

Finally, Ethan Wadsworth’s A Community of Snails reminds us of the fun and happenstance that occur in the art-making process. A new world order of humble snails in a familial setting is hatched from a mind engaged in the simple acts of imagining and just doing. 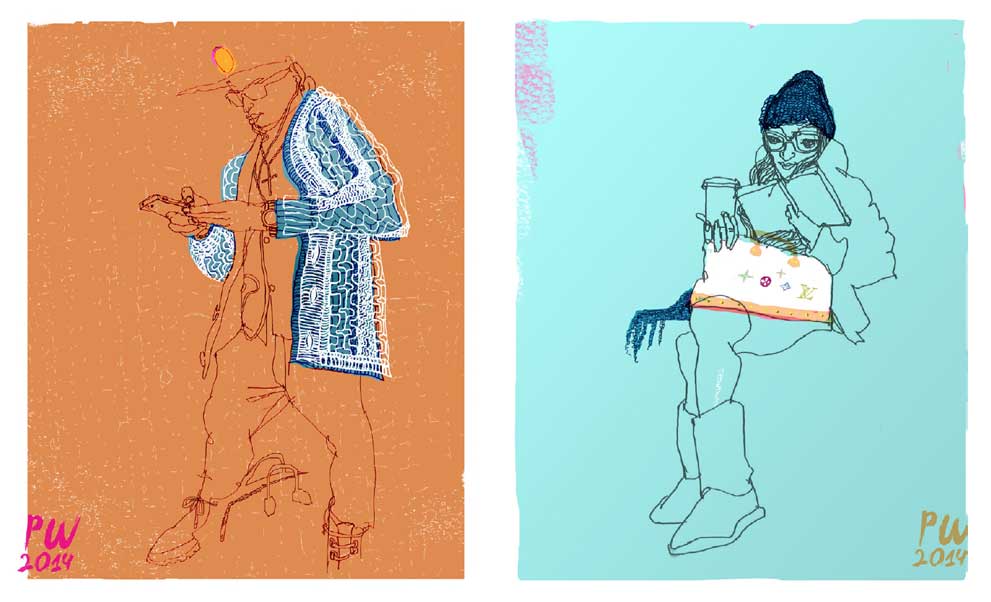 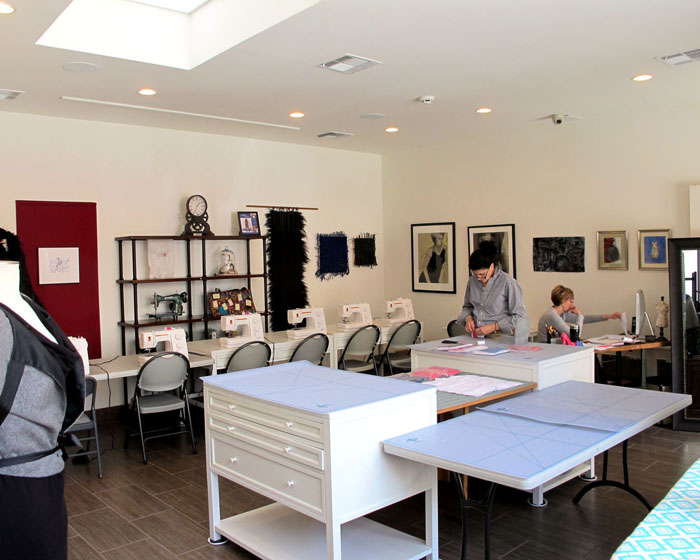 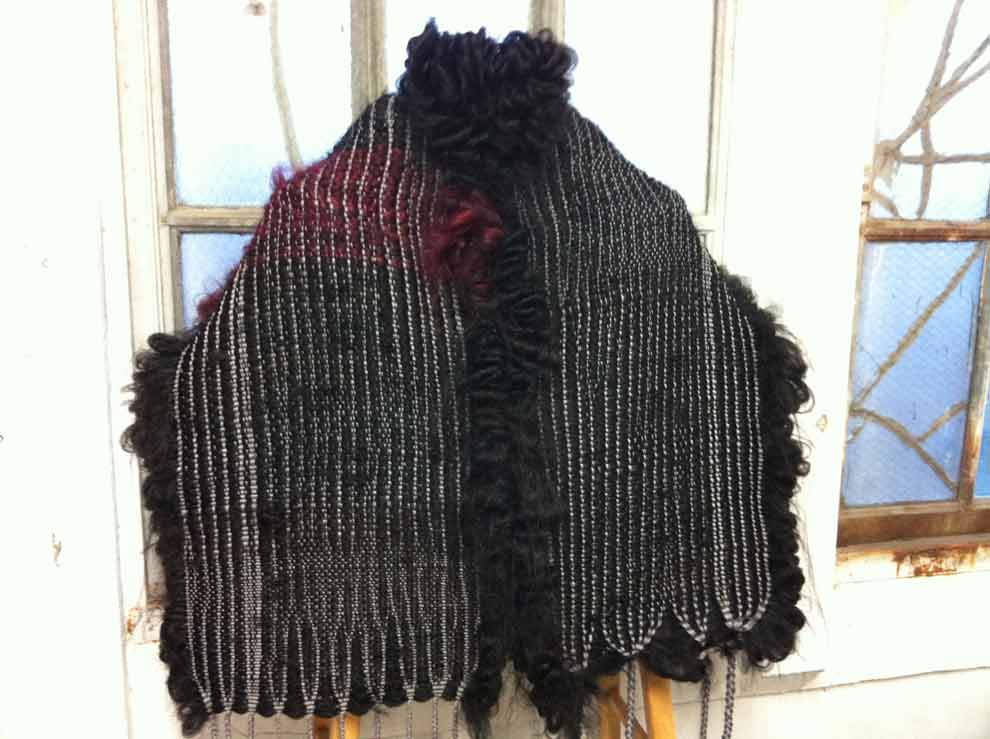 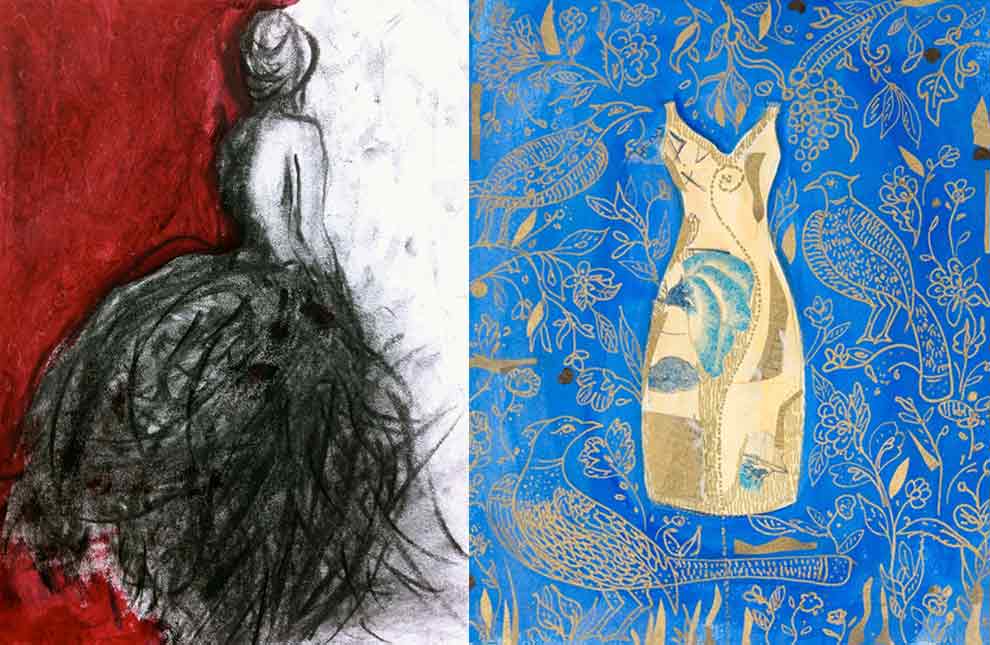 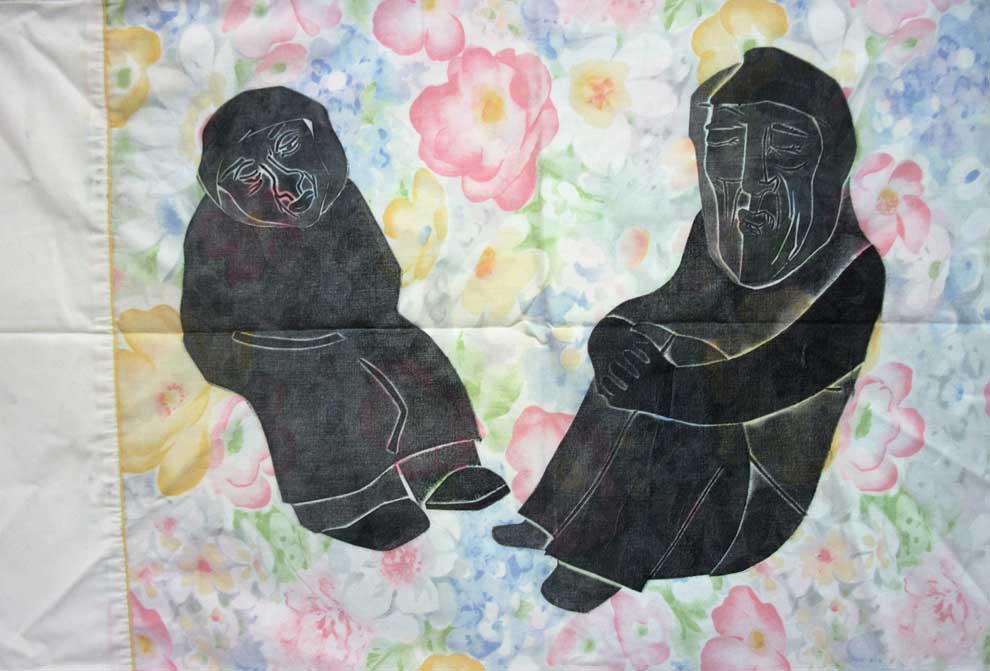 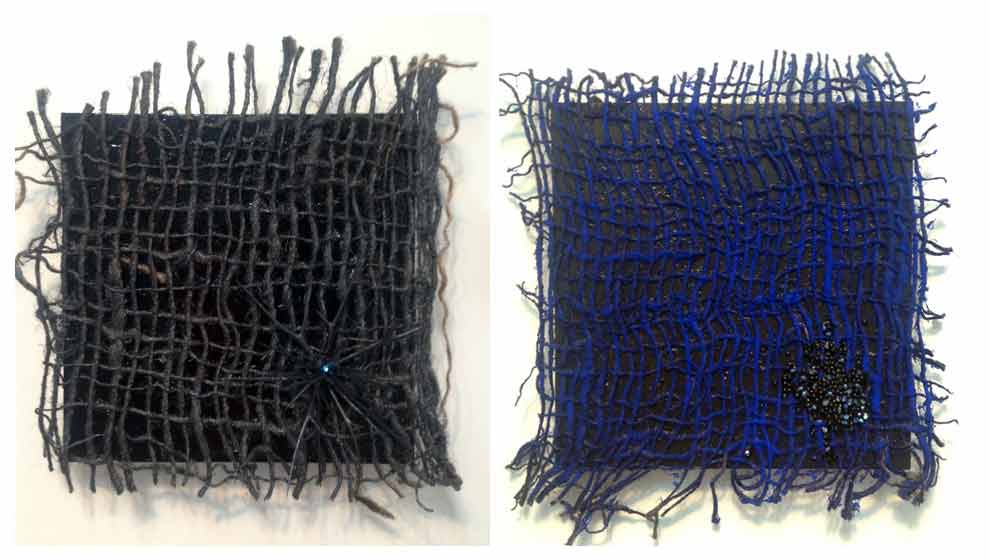 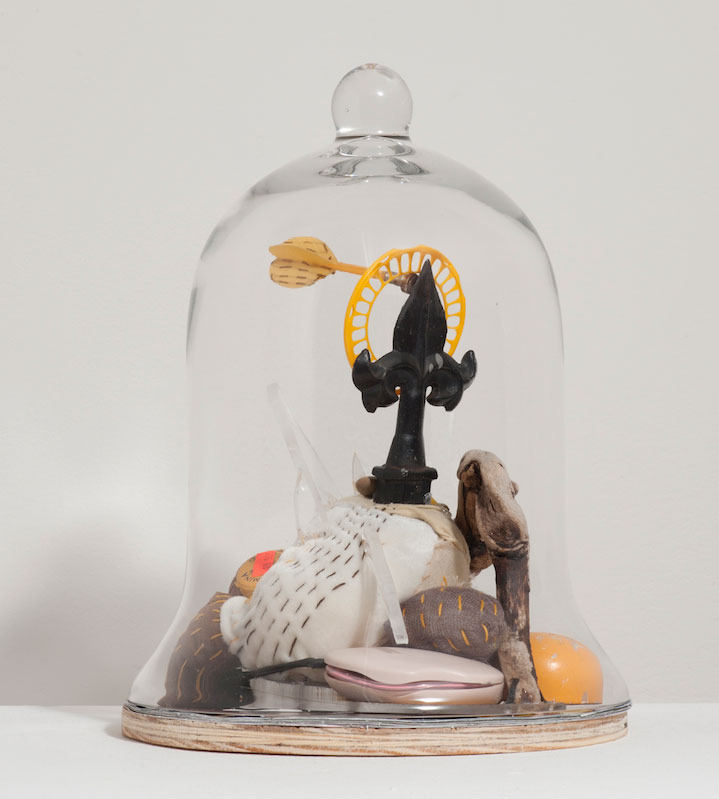 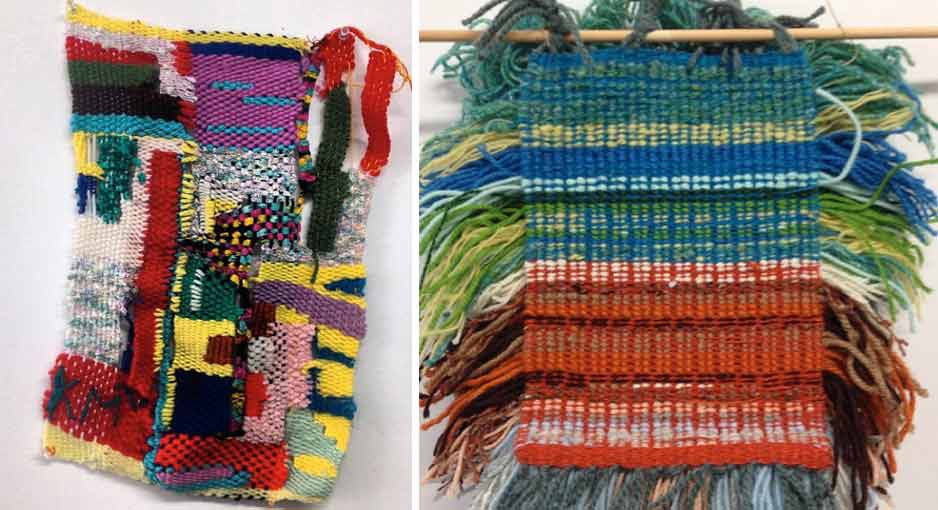